TOM JOURDEN is originally a “southern boy” from Louisville (Loo-a-vul), Kentucky. He was an avid tennis player throughout his youth and was ranked consistently at the top of his age group in Kentucky and as high as 35th in the USA. His parents were happy that all those tennis lessons paid off when Tom graduated high school at 16 and put himself through college by being a tennis pro in the summers.

After graduating with a Bachelors of Business Degree in Finance, he worked over the next seven years with two different Fortune 500 companies and rose to the level of District Sales Manager over North Carolina and Georgia. After secretly studying acting at night while wearing a suit to work every day, Tom escaped the corporate rat race to become an actor.

Tom started working immediately in numerous television shows, commercials, films in addition to a busy voice-over career. He then discovered television hosting (or did it discover him?) and became the host for DirecTV’s flagship channel which was followed by hosting Travel Channel’s ‘Amazing Vacation Homes’ which took him to many exotic and unique locations. However, it was his infomercial hosting that made him a “I know that guy” recognized personality. Tom became the trusted host of over 100 infomercials resulting in almost 1 Billion dollars in sales. His top airing Lifelock show won the Moxie award for “Best Long Form Brand Response”. 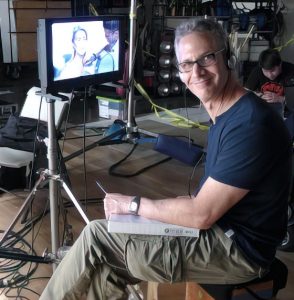 In 2007, Tom added Producer/Director/Consultant to his resume by blending his Corporate Marketing expertise with his Direct Response knowledge. He has created and/or consulted on numerous successful DR campaigns ranging from weight loss to beauty to intellectual properties. His success is due to a perfect mix of business background and on-camera talent along with a willingness to constantly reinvent himself in his entertainment career. Check out his podcast “The Pitch with Tom Jourden”.

Tom (in partnership with Blue Reef Productions) is the Producer behind the hit female beauty brand “Flawless’ from day one.  Flawless (www.flawlessbeauty.com) has had unparalleled success in becoming one of the fastest growing brands and quickly has become the market leader in female beauty products.  Working with both IDV Corp and Church & Dwight, Tom has created every Flawless commercial from beginning to end – scripting, casting, producing, directing, editing, etc.